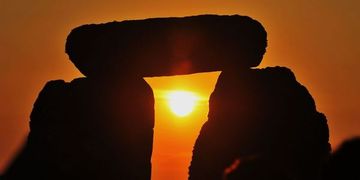 The word Solstice comes from the latin word ‘solstitum.

Sol, means ‘sun’, and stitium, means ‘stop’. This is the time where the sun appears to have stopped.

Summer Solstice, is the first day of summer,the longest day of the year, and has the shortest night.

From this start date the days get shorter and the nights get longer.

The solstice, sometimes called midsummer because by now farmers have long since completed their planting.

This is the day of the year where the sun is at the highest point over the Equator, and the farthest north. Energetically, a portal of positive celestial potential opens up.

The Mayans, Essenes, Druids and Egyptians, built temples that captured this moment of alignment, and they would take part in sacred ceremonies. The head of the Sphinx at the Great Pyramids of Egypt, has the sun of the summer solstice symbol at its crown.

Light is spiritual by nature.The sun and stars have much spiritual power that has its roots in the higher dimensions. The summer solstice is described as the gate of ascent out of this world into the realm of spirit by both Krishna, in the famous text The Bhagavad Gita, and in the designs of the secret caves of Mithras.

The summer solstice is a celebration of the return to light. It reminds us of the light that resides in all of us .

It is about awakening, and how the light cancels out the darkness.

The summer solstice is a time to spend outdoors , to embrace the powerful sun energy, To be gratitude about the abundance and blessings that are in our lives. Giving thanks.